Back to School… again

Last Saturday I  revisited the first school I ever attended.  The one I described  in my other Back to School blogs.

My granddaughter’s freshman volleyball team was playing there.   Even though its only about 40 minutes from my home, there had never been a reason to go there.  I had driven past the old building a few times but had never stopped to look around.   The gymnasium where the games were held was in a new addition which wasn’t there in 1956 when I attended.  But the entire old structure is still there and it looks just the same.

When I entered the new annex the first thing I saw were pictures of all the graduating classes from the school.   If you believe in karma…. you would understand how I felt when I noticed the rack of pictures was opened to the Class of 1968….you guessed it, my very own class from 1956 pictured twelve years later.  I quickly scanned the faces and names.  Memories flooded back.  Fuzzy memories, mind you, but memories I hadn’t accessed for a long long time.  I recognized my old best friend and a couple of boys who were kind of sassy and talkative.  The names were all familiar as were the faces.

I reached into my purse for my camera and was totally disgusted with myself for not packing it!  My phone camera (not a great one) would have to do.  So I quickly snapped a picture of the picture.   Then I decided to just snap about 4 photos at a time to get  closer shots.  Got some strange looks from other people coming into the annex but kept snapping.   I almost forgot about the volleyball game until I heard the buzzer in the gym which snapped me back to the present.

As I watched the game, I wondered if any of these girls from the opposing team were granddaughters of former classmates…. was there possibly a former classmate there watching with me?

After the game, I walked around and checked all the doors that led to the old building.  No luck.  I asked a few people but there were no administrators around who could allow or deny me entry.

So I settled for just feeling the memories. 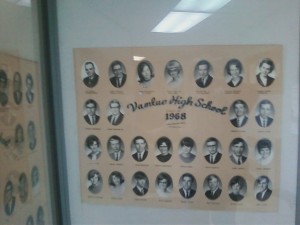 Welcome to Life in the 50's and 60's and beyond .... where I write about my childhood memories, music of the 60's and about life in the country. I am a mother, grandmother, farmer's wife, business owner, and retired teacher.
View all posts by Life in the 50's and beyond... →
This entry was posted in My Life and tagged back to school, best friends, blog, boomer blog, childhood, Class of 68, elementary school, family, grandmothers and granddaughters, high school, life, memoir, memories, memory, photos, Recreation, senior pictures, Volleyball. Bookmark the permalink.

2 Responses to Back to School… again