My mother-in-law was a great cook.   She raised four hungry boys on meat and potatoes.. 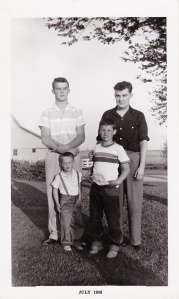 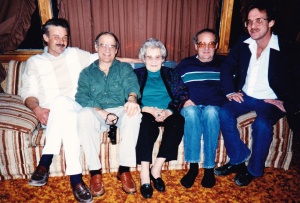 When I married her son, I knew a little about cooking.   I had taken baking and cooking projects in 4H.  When I was 12 years old,  my mom went to work second shift  so I learned to cook supper for my Dad, my brother, and me. When I went off to college and had an apartment, my roommate and I did some acceptable cooking.

But my mother-in-law, whom everyone called Grandma  (whether you had kids yet or not)  had it all together when it came to cooking.   She would whip up Thanksgiving and Christmas dinners for 18-20 people with little help from her daughters-in-law.  Not that we didn’t offer to help, but she was in control and all of her boys wanted to eat her cooking, anyway.  So while she was still able, she cooked.

Her German chocolate cake was legendary.  It was soft and moist and melted in your mouth.  It raised up high in the pan and looked as good as it tasted.  Of course, being a good little newly married wife, I tried to emulate her style of cooking because that’s what my husband wanted.  Sometimes I succeeded and sometimes I didn’t.  But I kept trying.

The one thing I could not even come close to was that German chocolate cake.  Mine was always too dry.  Or if it was moist, it barely came close to the top of the cake pan.   The icing was either too runny or too thick.  I just could not do it.

After many attempts and many failures, I began to think that the secret to Grandma’s cake was……. the pan.   It was a Wear-Ever aluminum pan, but not the flimsy aluminum that you see in stores today.  It was heavy.  It was made in the USA.  It had metal handles on each end that flipped up and down and were so handy to carry.  It had a sliding aluminum lid that fit into a groove and slid right over the top of the cake.  Well, it slid over the top of my cakes.  No way it would slide over Grandma’s cakes because they raised up so high the lid would have sliced off the top.  So she did what my mom did, stuck toothpicks in the cake, then covered it with Saran Wrap.  The toothpicks kept the Saran Wrap from sticking to the icing.

I really really wanted to make a cake that compared to hers.  I just had no success.  So one day, I asked her for help.

“You make the best German chocolate cake,” I started, “but I cannot seem to get mine to turn out as good as yours.  Could you show me sometime how you do it?”

Well of course she would,  because that was the type of person she was.   “Come here,”  she said. “I’ll show you right now.”  She reached into the cupboard.   I was wishing I had a paper and pencil to write down this legendary recipe. I was sure she was going to get out that special cake pan and explain how it worked.

“Here!”  she said with all seriousness.  “You can follow directions, can’t you?  Just make sure you always get Duncan Hines. I have the best luck with that brand.”

She handed me a box of cake mix.  Duncan Hines.   German Chocolate.

Then she went into the living room and turned on the TV, because it was time for Wheel of Fortune.

I followed behind with my box of DuncanHines Cake Mix.

Welcome to Life in the 50's and 60's and beyond .... where I write about my childhood memories, music of the 60's and about life in the country. I am a mother, grandmother, farmer's wife, business owner, and retired teacher.
View all posts by Life in the 50's and beyond... →
This entry was posted in My Life and tagged baking, blog, cake mix, cooking, Duncan Hines, farm life, german chocolate cake, made in the usa, memoir, mother in law. Bookmark the permalink.

'Growing old is mandatory; growing up is optional.' Chilli Davis

Music means something and art is right up there too