Last week my cousin called and invited us down to watch him make maple syrup.  Dave learned the basic process from my Grandpa and through trial and error through the years.   About a year ago he built a small building on his property … his Maple Sugar Camp, which is what we called Grandpa’s little shack in the woods.

When we were kids, we would all gather to make the syrup, my parents and brother, my aunt, uncle, and cousins.    Grandpa’s woods was probably about a mile or so from the house on his property, so we would all bundle up and trek back to the woods.  Grandpa had already done the tapping of the trees.   He had hammered a little “tap” just barely into the sugar maple trees in the woods.  The sap, from which the syrup is made, is located in the outer layer of the tree.  Then he hung buckets under each tap to catch the sap when it “ran”.  Usually in February and March a  thaw would occur that would get the sap running.  Grandpa had to be vigilant and watch the weather and temperature so he would know when it was time for the sap to start running. 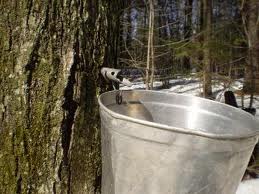 It seemed to me that there were hundreds of buckets hanging from the trees in the woods.  I wish I had paid better attention back then to the whole process.  For my brother and I, and my cousins,  who lived a couple of hours away, it was a chance to play and reconnect in the woods.  One of the games we played was to gather up sticks and branches, find several trees that were fairly close together and build little houses or forts by stacking the branches in a formation supported by the trees.  It was great fun and we would admire each other’s “forts” and then I suppose play games from there.  Most of the fun was in the building of your fort.  If you have ever read The Boxcar Children books, you will have a good idea of what I am talking about.  We would gather branches, sticks, leaves, rocks, and anything else we could find that would serve a purpose in our little forts.

While we were off playing, the grownups were working.   Buckets of sap were collected and carried back to the sugar shack.  Grandpa had a cast iron tray that was heated by a fire.   After the sap was filtered, removing any bits of bark, leaves, bugs, or whatever might have fallen into the bucket, it was poured into the iron tray and heated.  This took a long time, depending on the strength of the fire and the conditions of the day. Lots of firewood was needed to keep the fire going, and Grandpa had already taken care of that.

The syrup finally began to  boil and thicken as it boiled.  Grandpa and the other grownups would skim the foam off the top of the boiling sap and throw it on the ground.  Several pair of watchful eyes kept an eye on the sap as it cooked.  Timing was everything and having experienced eyes around was a big plus.  When Grandpa determined that the sap was done, it was allowed to cool, then placed in jars for storage.   It was a continual process.  There were actually 2 trays of sap over the fire.  One was where the sap was first heated.  As it reached a certain stage, it was transferred to the next tray where it was cooked until thicker.

maple sap cooks over the fire to become maple syrup

No extra ingredients were needed.  Maple syrup is pure and simple.  At least in its composition.  My cousin has improved on the process by using some collection equipment that was not available to my Grandpa.  But for the most part, he cooks it the old-fashioned way.  The trees where he collects the maple sap are almost 30 miles from his sugar camp.  He still collects the sap in buckets (some of them are the same buckets Grandpa used) but hauls it back in a plastic container with hose and filter.   Still he taps the trees himself, collects the buckets by hand, and cooks it the traditional way.   There is a lot of labor involved in making maple syrup the old-fashioned way… it’s definitely a labor of love and a labor full of memories.

It takes about 35 gallons of sap to make 1 gallon of maple syrup.

100% maple syrup has 50 calories per tablespoon and 20 antioxidants.

Old-fashioned maple syrup has no additives.

Welcome to Life in the 50's and 60's and beyond .... where I write about my childhood memories, music of the 60's and about life in the country. I am a mother, grandmother, farmer's wife, business owner, and retired teacher.
View all posts by Life in the 50's and beyond... →
This entry was posted in My Life and tagged all natural, baby boomer, blog, boomer blog, Bucket, how to make maple syrup, Maple, Maple syrup, maple syrup facts, old fashioned maple syrup, Plant sap, sugar camp, Sugar house, sugar maple trees, sugar shack, Syrup, The Boxcar Children, write, writer, writing. Bookmark the permalink.

This site is about my journey into male chastity. I hope to be brutally honest and perhaps helpful to others wanting to try the same thing.