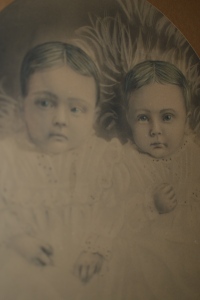 Anna, on the right, and Martha

My Grandmother, Anna, was born in 1900.  She had  lovely red hair.   Her identical twin sister, Martha, looked so much like her that I grew up thinking I had two paternal grandmothers.  The sisters were close and much alike but still had individual quirks.  Anna’s red hair was soft and lay in waves.  Martha’s was more of a strawberry blonde color and was usually in rolls.  Anna was quiet, Martha was more talkative.  Anna was thin and delicate, Martha was sturdy.  Anna married and raised a family, losing  a tiny daughter from a childhood disease, and  many years later a son (just returned from the Korean Conflict)  in an auto accident.  Martha never married and was a caregiver from an early age.  Martha cared for her parents,  including her bed-ridden mother.  Two unmarried brothers, August and France, lived with Martha and I am sure she took care of them as well.  Later she became a paid caregiver, taking care of the blind mother of a well-to-do neighbor who lived just a few blocks from her home.  Anna was troubled.  She suffered from depression and after the death of her son underwent shock therapy.  She didn’t drive.  She was married to Grandpa Carl who was a bit of a tyrant.  Martha seemed always happy, content with her lot in life, determined to make the best of every situation.  Anna was dependent upon her husband and two surviving children, while Martha was quite independent for a woman of her generation.

I was born when Grandma and Martha were 50.  What I am telling about now is what I learned from observation and from other family members.  It may or may not be totally accurate. It’s what I remember.

Anna and Martha loved all things nature.   They were cat lovers, dog lovers, children lovers, and both grew beautiful flowers in their gardens.  I have often thought of them as early recyclers.   Grandma, especially, would take plants, flowers, weeds from the yard and from the fields and fencerows on their farm and turn them into beautiful floral arrangements.  She loved pine cones, and cockleburs, and golden rod, and ragweed.  From her delicate hands came the most unusual works of art I have ever seen.  She arranged wheat and oats and rye and barley.  She was forever collecting colorful leaves and nuts in the fall.  She had a collection of  turkey wishbones on a small dresser in her kitchen.  It was a fascinating place for a little girl to visit.  She is the first to teach me how to make a small doll out of hollyhocks.  My first finger prick was from the rosebush in her front yard.  She would collect milkweed pods (which I was hugely fond of) and spray paint them gold or silver and place them in her natural arrangements.  She would save tiny pieces of foil from gum wrappers (yes gum used to be wrapped in silvery foil) and chocolate candies,  and wrap the individual oat seeds on stalks of oats until she had a glittery confection.  Then she would place it in a vase with other twigs and weeds and you would wonder how it could be so beautiful.  Grandma’s vases were not fancy.  They were Mason Jars, old pickle jars, jam  and jelly jars, teapots, tall drinking glasses, soda bottles, and anything else she could recycle into a container.

Both women were letter writers.  Even though I lived just eight miles from her house, Grandma Anna would send me letters occasionally.  They were usually accompanied by tiny drawings of mice, cats, bunnies, and fish.  Once in a while,  Grandma Anna would send a stick of gum along in the envelope.  Martha would also send letters and card, but not as frequently.  She was a working woman and a caregiver and probably had less time to spend on letters.  I owe my love of letters to those wonderful ladies.   When I went off the college (an entire hour away from my home!) I still received their  letters.   When my own children were little, Anna would continue to make the tiny drawings of critters to share with them.

More stories about Anna and Martha to come……

Welcome to Life in the 50's and 60's and beyond .... where I write about my childhood memories, music of the 60's and about life in the country. I am a mother, grandmother, farmer's wife, business owner, and retired teacher.
View all posts by Life in the 50's and beyond... →
This entry was posted in My Life and tagged 1900, blog, boomer blog, childhood, country life, farm, grandmothers and granddaughters, life, Mason jar, memoir, memories, nature, relationships, simple life, twins, writer. Bookmark the permalink.

11 Responses to Anna and Martha