Our farmhouse was built in 1909.  It was purchased by my husband’s family in 1951.  My husband and his three brothers grew up here and shortly after we were married in 1971 we moved in.   I grew up in old farmhouses so there was little adapting for me.  I was used to drafty windows, creaky floors, narrow stairways, and upstairs bedrooms with no heat.

My in-laws did basic, but important updates during the twenty years they lived here.   They concreted the basement, put in new windows, new doors (interior and exterior), updated the bathroom, updated the kitchen in 1964, added hardwood floors, and put in a furnace.

But as the years passed and our family grew, more updates were needed.  In 1979 we built a family room with fireplace and a downstairs master bedroom and added a bathroom and walk in closet.  When my son started his own construction business about 15 years ago, we hired him to replace the windows and put on vinyl siding and new entry doors.  Little by little we kept the house looking as fresh as we could afford.    A few years ago we gutted the kitchen and again, my son helped me by  creating a new kitchen.

The four upstairs bedrooms were a blessing when the kids were growing up.  There was plenty of space and while we didn’t remodel upstairs, we painted and wallpapered and carpeted as they grew and needed their own space.

All those bedrooms and all that space turned me into a borderline hoarder.  It is definitely a disadvantage to have lots of space because I tend to fill it up with the stuff I don’t need anymore.  So instead of getting rid of things, I move them upstairs…. out of sight… out of mind.

I have been attempting to declutter for many years (even before decluttering was the trendy thing to do)  but I never made much headway.  I would get rid of loads of stuff, have garage sales, give stuff away and would have some space.  But it quickly filled up with more stuff.

I’m at it again.  Last summer I painted one bedroom and purchased twin beds for a guest room.  Another bedroom had a double bed and will soon be liveable again as I clean and rearrange furniture.  A third bedroom actually does have a heating/a/c duct.  It was always the nursery for that reason.  Now I have moved all our photographs, photo albums, memorabilia, and business file cabinets in that room as well as a desk to help me sort through all of the photos I have.  I inherited many of the family pictures from both sides of our family (because I have the space)  but I am preparing to sort and give away to the next generation.    The fourth bedroom is the junk room.  Christmas decorations, seasonal decorations, toys that the grandkids sometimes play with, glassware that was packed away during the kitchen remodel in 2013 and never unpacked, an old stereo system, a keyboard, canning supplies, and boxes of sheet music given to me by my piano teacher in 1968.  I do have some emotional issues here.

While painting the latest guest room I remembered why old houses are such a challenge.  I painted three walls a light gray and one wall a darker shade of gray.  The walls are plaster, cracked from over a hundred years of freezing and thawing and kids jumping up and down.  Some of the cracks have been patched over and over and are never going to look new unless we replace with new drywall.  I don’t have the energy for that anymore and the dust from the cleanup… its horrendous.  So I patched and painted and touched up.  There are no square corners in the room, so painting one wall a different color was pretty tricky.  Its not perfect but its fresh and new and it will  do.

Since I began this post (several months ago)  our youngest adult child has moved home. More rearranging has been completed to accommodate their belongings.   I guess what keeps this old house alive is transition.   From one generation to the next, children moving in and out, grandchildren spending overnights; it all continues and makes this old house a home. 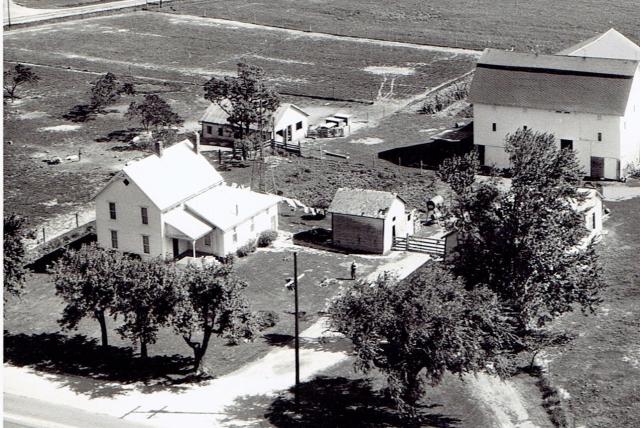 This is our farm in the 1950’s.  None of the buildings in the picture or the old big barn remain.

6 Responses to This Old House